In Defense of Catholic Guilt... 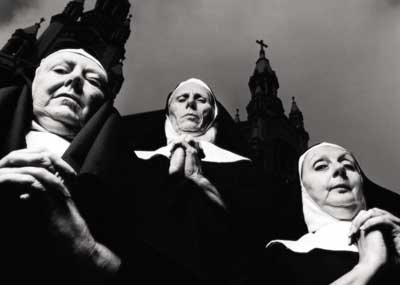 One of my favorite non-sequiturs concerning the Catholic Faith involves certain unsolicited (and arbitrary) allusions to "Catholic guilt." You could be talking about the work of the Missionaries of Charity in outer Mongolia, and someone, out of nowhere, will feel it necessary to interject this into the conversation. Indeed, whether it is some fallen away Catholic who gleefully tells you that they are a "recovering", or some cultural Episcopalian who wants you to know that they too are [basically] Catholic... but "without all the guilt," there seems no end to the hilarity of impenitence. In fact, as a Catholic you practically feel the need to offer a mea culpa every time you offer a "mea culpa"!

At any rate, what got me thinking about this (other than Lent), was this interesting little story that recently appeared on NPR (it is well worth the listen). The story is about a father who leaves his religious order (he was a Franciscan monk) in order to marry a woman, who herself happened to be in a religious order (she worked in a hospital in Africa with lepers).

Why is this story notable? I suppose it has something to do with the tantalizing combination of religious vows and forbidden love (sounds already like a Spanish soap opera). For those unfamiliar with religious vows, the one who enters into the "consecrated" life does so as an offering to God. The decision to forego marriage in this case is seen, not as a prohibition, but rather as an opportunity to serve without limitation. Each of these individuals could have chosen to be Catholic social workers and married, but instead they vowed themselves to God and placed themselves in this service of the "least of their brethren". Why does this matter? Because if you notice, my emphasis is very different than theirs. NPR tells this story as if this couple had escaped like Romeo and Juliet from a cage fashioned by some cruel tyrant. And so the audience is supposed to sop it up like a giant helping of biscuits and gravy, while never once considering what exactly they are sopping up. To show you what I mean, let's flip the script a little bit. What if- instead of a religious order- this man had left his first wife for no apparent reason other than the fact that he fell in love with another woman… and then, as the story goes, lived happily ever after. OK, perhaps you may have no problem with infidelity as long as it leads to happiness, but if the story were told that way, would it be given its own segment on NPR?

There is no reason to tell this story other than to rebuke the Church for its practice of celibacy. The implication here is that these poor unfortunate souls escaped from some unjust imprisonment, and as a result finally find true happiness. Yet here's the other side of the "romantic" coin that you will not hear in a story like this. What about all of those poor lepers who will never know the gentle touch of an avowed religious sister because she abandoned her post? What about all of the poor and disenfranchised who will never experience the consolation of God's mercy because a Franciscan monk broke his promise to God? The real question is why is this a story of triumph, while the story of men like the one featured below (thank you Father Pat) often goes unsung? 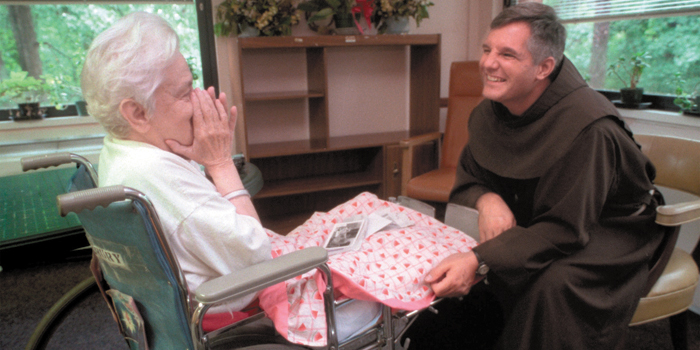 At this point, you may be saying "aha- there it is; this is why we talk about the unpleasantness of Catholic guilt! This is why people are so relieved when they remove themselves from it. However, interestingly enough it is the narrator in this piece (the son of this marital union), and not any Catholic curmudgeon, who brings up the subject of guilt. Notice, no one in the story itself "guilts" anyone into being religious, not even the head of the religious order ("if you love her, then marry her"). Thus, I have to wonder, who is the one feeling/imposing guilt here? Could it be the son, who must now carry the weight and responsibility of knowing that his own life may have come at the expense of others? Is this the reason he felt the need to tell us all his own private confession in so sentimental a fashion; "look now- I'm a father... See, it was all worth it?" I say this not to lay further burdens on this individual, but only to once again ask the question; "What is the motivation for this story?" For if a priest and a nun hadn't abandoned their religious vows, this tale would have inspired little more than a yawn.

The same can be applied when it comes to guilt. If you feel guilty as a result of harming another person, then you may just be a healthy human being. If you fear that every thought that comes into your head is like a dagger that mortally wounds everyone, then you may just want to get yourself to a psychiatrist or a priest (whichever you prefer). This is simply common sense, and Catholics actually have a long standing tradition of cautioning anyone against this exaggerated sense of culpability (we call it "scrupulosity", which is like a kind of spiritual OCD). Nevertheless it is true (I know) that there are people out there (in our homes, churches, and everywhere else) that might want to play on our guilt for their own purposes. However, it is always essential to remember that abuse does not disprove use.

So yes, in the end, I am grateful for a thing called "Catholic guilt"; I am grateful for that little tocsin inside my head, warning me against the dangers of moral anarchy, warning me against the evil of treating myself, as well as others, as if they were nothing more than a raw material to be used. Once again, I do not deny that there are people out there who may try to play you like a fiddle, but as for someone like me, who, for a time in my youth, rejected any notion of sin and guilt, I can only say that "guilt" genuinely saved my life (not to mention my soul). Indeed, were it not for that horrible hound relentlessly pounding in my chest, there is little doubt in my mind that my life would have been forfeit, and my talents tossed with utter scorn on the smoldering ash heap of mediocrity. Posted by Sean Chapman at 11:21 AM No comments: