The whole pose of the music industry in the late 1960's was that it stood for something, and furthermore, no amount of worldly bribery could take that away. But as Don Henley pointed out with his image of the "Dead Head sticker on a Cadillac," many of those ideals were sacrificed to that very same god of materialism. In the spirit of that compromise, I will be examining some of the most egregious and bizarre examples of bands (or those who owned the rights to their music) selling out their musical integrity for the purposes of crass commercialism. Now some may argue that not all of these songs are of the highest musical pedigree, and that may be true, but what is indisputable is the fact that no matter what people thought of them before, henceforward they will always be regarded as a TV jingle which either annoys or amuses, but will most certainly never again be regarded with respect.

I don't know how responsible Mr. Redding was for this classic being used in a root beer ad, but whoever is to blame, they should be ashamed of themselves. Once a bittersweet ode to "sittin' on the dock of bay", while simultaneously lamenting one's own misfortune and ill-begotten adventures, it is now simply a song about a lovely afternoon wherein one ponders the profound question of whether or not to take another sip of one's carbonated drink. I am not sure what offends me more, a rock legend lending a hit song to a company that sells denim products, or the cheap pun that resulted from the deal (Sassons say so much...). In either case, whenever I hear the song on the radio now I find myself singing the commercial version and not the real one. This is quite a remarkable accomplishment on the part of the advertiser, especially considering I haven't seen the commercial since it came out in 1984.

6. Player - Baby Come Back (The Swiffer)

Thanks to this Swiffer commercial, Player will forever be remembered in infamy for writing a song, not about a woman whom he is trying to convince to return to him, but a product which apparently has turned the every day mop into some kind of stalker lurking behind trees as well as grocery store display signs. The commercial is quite amusing, though whenever it comes on the radio now I must concede that I get a little paranoid and wonder if I myself am being watched by some sort of inanimate object.

Best known for their hit Don't You Want Me (Baby), the Human League was an 80's New Wave band that specialized in turning remote British pop into something a little bit more palatable and familiar. The band was cold and steely in appearance, and as a young boy it always seemed to me that they would have made some pretty good aliens (kind of like the alien trio in Superman 2). Taking all of this into account, one might assume that such individuals would not be so interested in selling their songs to various advertising agencies. However, that is precisely what they have done. And what's worse, not only did this formerly gritty English band (as gritty as you can be wearing that much makeup) decide to sell the song Fascination to a charcoal company, but they also went ahead and sold Human to Liberty Mutual. The truth is I could have chosen either one for the list, but decided on the former primarily because there seems to be such a disparity between the song's original feel and the type of product that is being sold. I suppose I can get why a band would want to sell out to make a little money, but why would a charcoal commercial choose an upbeat new wave song, which seems to have very little to do with barbecuing, and then to render the choice even more bizarre by the slowing the melody down to an almost snails pace. Indeed, any slower and the vocalist would sound possessed.

Perhaps not one of the most lyrically astute songs in history, Melt With You topped the charts in the mid 80s; "I'll stop the world and melt with you. You've seen the difference and it's getting better all the time." Not since Hey Jude has there been such awkward grammar in a song. Nevertheless, the hook in this song is undeniably, well, "hooky." Nevertheless, in the early 00's Modern English decided to allow Burger King to use it in a commercial in order to promote their new patty melt (or some such thing). Now when I hear the song, instead of imagining a romantic relationship, I see a cheeseburger with a piece of melted cheese on it morphing into the head of the lead singer. Indeed, it is a mystical sign for me that he and his lovely lady somehow- through the union of beef products, cheese, lettuce, and buns, have become one.... sandwich that is.

I am well aware that the Beatles cannot be directly blamed for this song being in a commercial. After all, it was Michael Jackson who swooped in and bought the rights to the entire Beatles catalogue. And as if that weren't enough, after doing it he subsequently allowed Nike to use it in a television commercial. This apparently was a great shock to sir Paul McCartney, for he had always considered Michael Jackson a great friend. In fact, as you will recall, they wrote two hit songs together. But apparently the soft spoken Mr. Jackson had other plans, for when the songs became available for purchase, he ignored McCartney's plea, and outbid him anyway. Consequently, a song that McCartney said really stood for something (though I am not quite sure for what), was given away to Nike as if it never really meant anything to anyone at all.


2. Debbie Boone - You Light Up My Life (Lifestyle Lift) 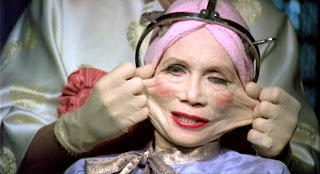 I cannot decide whether this is a form of blasphemy against God, or it is simply a form of self-mockery on the part of Ms. Boone. In any case, she apparently sees no problem conflating a song that was once devoted to the Almighty and using it in an info-mercial to sell plastic surgery. To be honest when I hear the commercial, I half expect her to start singing; "You lift up my face...", but for some reason that never seems to happen. More confusing to me however is what the song now represents in the light of the commercial. Is she singing it to her plastic surgeon, or is it an ode to her new face; "You light up my life, you give me hope to carry on". I could understand the correlation if the commercial involved reconstructive surgery, but no mere "lifestyle lift" is worthy of such celestial praise.


Of all the songs on this list, "Angel" is not necessarily the greatest, but it is the most egregious example of a popular song in advertising, and here's why. First of all, when the song originally came out, it was a virtual juggernaut on the radio primarily because it combined McLachlan's gorgeous vocals with a tragic yet ultimately redemptive theme; "In the arms of the angel fly away from here, from this dark cold hotel room and the emptiness that you feel. You were pulled from the wreckage of your silent reverie. You're in the arms of the angel, may you find some comfort here." Exquisite, but unfortunately I can barely even write those lyrics without somehow feeling profoundly irritated (and dare I say it, nauseated) for what it is now attached to. Does this mean that I think animal cruelty is a good thing, or that I am not in favor of organizations that seek to protect animals. Of course not- I can assure you that I am still an "elefriend." What I am complaining about is a well-composed song that has nothing to do with animals, though it is being employed as such. I'm sorry, but a dog is not capable of "reverie", perhaps a doggie dream or two, but not (for example) dwelling on memories of a great love that was lost in days gone by! Ms. Mclachlin must be the type of pet owner who refers to her animals as her children, which is why, I suppose, she is attributing human qualities to them. So not only is the song irrelevant to the commercial's subject matter, but now both have been tainted because whenever one hears the song, one can only think about suffering animals, and when one sees suffering animals one thinks about the song. And as if that weren't bad enough, around Christmas time, Ms. McLachlan carts out Silent Night in order to do the same. Once again, how does this relate in any way to the subject matter. Are the manger animals supposed to be those depicted in the commercial? Are these the angels that announced Jesus' birth to the shepherds in the field? The truth is this is the worst type of pathos that one can use, or maybe it's just lazy and utilitarian. But whatever the case, it is unlikely that I will ever again listen to the song Angel without also imagining some one-eyed, three legged dog shivering in Ms. McLachlan's lap... and that's just a pity.


Posted by Blergalicious at 6:57 PM