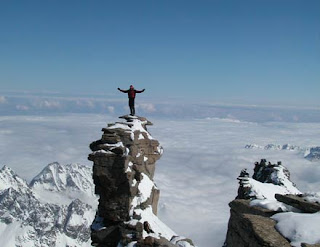 As we approach the beginning of a new year, people both religious and non-religious usually look for an opportunity to change something that is unpleasant in their lives. Although one does not receive absolution from this secular form of penance, one may indeed receive the personal grace and power to change something which probably needs a little changing. I was just reminded of this fact a few moments ago when I, like Pavlov's dog, clicked on a collection of the most embarrassing web moments of 2013. It was basically a series of back yard embarrassments. And while it wasn't the worst thing I have ever watched, it reminded me of the giant landfill of things that I have unfortunately laid before my eyes throughout the year. Not to be too heavy-handed about it, but the truth is I have given myself over to far too much nonsensical garbage like this, and far too little of that which truly elevates the soul. Which brings me to my point: There was a recent study done which may seem to be about as shocking as the discovery that water is wet, but is nevertheless worth repeating. The study set out to discover whether or not showing individuals a series of awe-inspiring clips would have any effect on their capacity to believe in the supernatural. Conversely, they also sought to discover whether or not the reverse held true as well. In other words, if you show a group of individuals a series of the most mundane clips in the world would it induce a greater degree of doubt about the supernatural? Those who participated in this part of the study watched a video of an interview with Ayn Rand arguing that some people in society were more valuable than others. They found that those who watched this kind of video were less inclined to believe in a higher power, while those who watched a series of clips that were awe-inspiring (like the one featured above) were far more likely to have a heightened capacity for faith.

The point here is not that this study proves the existence of God, but rather that it proves that human beings have the natural capacity for awe and wonder, and that what results from that experience is a sense that the universe is likely the result of some kind of grand Design. At the same time, what it also proves is that humans equally seem capable of neutralizing, and/or compromising, that very same capacity; "A good man out of the good treasure of his heart brings forth that which is good; and an evil man out of the evil treasure of his heart brings forth that which is evil, for out of the abundance of the heart the mouth speaks." Luke 6:45.

Whether you want to call this religion, psychology, physics, or all of the above, the fact remains that so many of us are weighed down and asphyxiated by a constant barrage of inanity. And while it is a noble thing to want to begin the year by implementing a strict diet to induce weight loss, it may be even more important to employ some kind of workout regimen for the soul. However, it is not just a matter of avoiding all of the salacious and senseless Youtube videos that become fashionable throughout year, it may also involve reducing one's intake of various news sites, especially those which tend to frame everything in the most apocalyptic and despairing tone. That said, what I am endorsing is not some radical form of escapism. To the contrary, what I am proposing is a fully balanced diet, one which includes all of the necessary staples. The problem is not that we occasionally consume "junk food", the problem stems from the fact that at this juncture that is about all we are consuming.

Therefore, as the New Year breaks upon us, let us not only commit ourselves to eating healthier in the physical sense (if that is in fact what we need), but let us also make sure we are feeding ourselves a steady diet of beauty, awe, and goodness. We can of course concern ourselves with "what the fox has to say", but God forbid that that junk food should be the only thing that we put in our system! Should it really be a surprise to us then that when we elevate our hearts and minds, we find it easier to believe, and that when care too much about what the "fox says", we don't care too much about anything at all? Avoiding what is base, and instead ingesting what amounts to a feast for the eyes, has the ability, as much as any treadmill ever could (I am biased, I always feel like I get nowhere with them), to lift us out of the muck and mire of mediocrity, and incline us to contemplate a far more sublime state of existence. May I myself have the courage to keep my own resolution! Posted by Blergalicious at 6:04 PM