5 Songs By Secular Artists About Mary:

As stated in a previous post, the artist that quite often writes the most theological piece is the one who is not trying to write anything theological at all. In the field of the imagination one quite naturally stumbles upon certain parallels between human and divine love. Just as the atheist John Steinbeck used Biblical imagery in many of his works, so the artist, by being true to the muse, cannot help but to wander into a whole constellation of truth. In the examples listed below, the songwriters are attempting to express what one might describe as the ideal beauty. Consequently, they come into contact with the very picture of beauty- immaculate Mary.

This atmospheric piece from the album So by Peter Gabriel, details the kind of alienation one often encounters in suburban life. The first two verses paint a rather bleak portrait of a lonely woman who wanders through; "corridors of pale-green and grey". Inspired by the poet Anne Sexton and her work of the same title, Gabriel goes well beyond the poem itself and includes biographical details that provide greater insight into the life of a women plagued by depression. Despite the grim beginning to the song, the second verse offers a glimmer of hope; "Pulling out the pages from drawers that slide smooth, turning out the darkness word upon word, confessing all the secret things in a warm velvet box, to the priest, he's the doctor, he can handle the shocks. Dreaming of the tenderness tremble in the hips, of kissing Mary's lips... Dreaming of Mercy street, where you're inside out; dreaming of mercy, in your daddy's arms again." The contrast between the harsh backdrop of the song and the presence of an abiding grace is an image reminiscent of the Psalms.

Mary's Prayer is one of those lost little hits of the 1980s that can easily slide right by you without you even noticing just how Marian it is. The song is about a woman named Mary that the lead singer clearly laments having lost; "I used to be so careless as if I couldn't care less... did I have to make this face when I was Mary's prayer."And then as if to warn his audience to avoid a similar error, he declares; "... and when you find somebody you keep, think of me and celebrate..." But the most interesting part of the song occurs in the second verse. As he begins speaking of the beauty of this ethereal figure, he also interjects pseudo-Biblical imagery; "Blessed is the one who shares your power and your beauty Mary. Blessed is the millionaire, who shares your wedding day..." There is an element of Gestalt about these lyrics, an intended ambiguity that allows the listener to see the parallels between both human and divine love. So is this "wedding day" about Mary the Mother of God, or is it simply about lost love? The answer is yes. The parallel is even more blatant when the chorus arrives; "And if I say, save me, save me, be the light in my eyes, and if I say ten Hail Mary's, leave a light on in heaven for me." At the start of the song, an earthly love seems to be the driving force behind it, but by the end the emphasis seems to shift to the divine. In fact, the songwriter even goes so far as to impute intercessory powers to this particular woman; "... and if I can't reach the top of the tree, Mary you can hold me up there, what I wouldn't give to be when I was Mary's prayer." 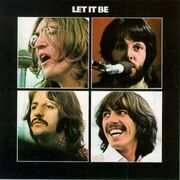 When it comes to this Beatles classic, people are quick to point out that Paul McCartney was writing it about his mother "Mary" and not about the Virgin Mary. And this would be be a significant detail, were it to in any way undermine the central thesis (which it does not). Motherhood is motherhood is motherhood. If Sir Paul sees some ideal beauty in his Mother, then how could it not, like the moon, reflect an even more immaculate love. Did McCartney know that he was essentially repeating the Angelus when he wrote the words "Let it be", a line that blatantly echoes the very words that Mary spoke to the archangel Gabriel; "Be it done unto me according to thy word"? Whether McCartney intended this or not is irrelevant. By virtue of wanting to praise the good of motherhood, he has indirectly praised the Mother of all the living; the one who was made perfect from her conception. He praises her for her wisdom; he praises her for patience and trust; he praises her for the gift of her consolation. Mary glides right through the verses of this song like a mysterious, yet potent, force. In the final verse, he universalizes this sign of hope by promising this Marian consolation to all the "broken-hearted" of the world, assuring them that in time "an answer" will come.

It is more than a little ironic that the fourth Marian-themed song should come from the artist who wrote the ultimate anti-Marian song (viz. Only the Good Die Young). Nevertheless, love covers a multitude of sins, and in this wonderful ode to femininity, we once again get a distinct picture of what this creature called Woman truly embodies. Of all the songs on the list, this is the only one that never actually mentions Mary by name. However, if you look at the virtues that are attributed to this woman, you quickly come to the realization that he doesn't have to; "She's got a way about her; don't know what it is... She's got a light around her... She's got a smile that heals me... She comes to me when I'm feeling down inspires me without a sound, she touches me, and I get turned around." Grace is the operative word here. Men are not given the name "Grace" by their parents, and there is good reason for that. The power of a man is generally exhibited through some sort of physical exertion, while the power of women is far more intangible and mysterious. Some may point out that there are many songs that fit this bill, and I agree. But whether it's Lionel Ritchie, Led Zeppelin, or Daughter Zion, it doesn't change the fact that men have been writing hymns to this ideal woman since the beginning of time. Nevertheless, when I listen to songs like "She's Got a Way", I can't help but to think that these artists (especially those most inclined to write love ballads) would be far better off if they didn't confuse their beloved with the Beloved.


5. The Song of Bernadette - Jennifer Warnes and Leonard Cohen

Their names may sound unfamiliar, but you are more than likely to recognize the songs that are credited to them. Warnes reached the top of the charts with songs like "Up Where We Belong" (with Joe Cocker), "Right Time of the Night", and the theme song to- of all things- "Dirty Dancing". Leonard Cohen is perhaps best known for his song "Hallelujah", which was most popularly covered by the late Jeff Buckley. Of all the songs on the list, "The Song of Bernadette" is undoubtedly the most obvious in its implications. There is very little question about the identity of the central figures, or even the central message; "There was a child named Bernadette, I heard the story long ago. She saw the queen of heaven once, and kept the vision in her soul". Some may consider the music and message a bit maudlin, but being one for some occasional "sap", I cannot help but like this song. The message is simple but by no means does it cover the same old ground; "So many hearts I find broke like yours and mine, torn by what we've done and can't undo. I just want to hold you, won't you let me hold you, like Bernadette would do." Indeed, it is one of those rare instances where a secular artist simply tells a religious story without any hint of irony. Worth noting is the fact that these two also collaborated on a song called "Joan of Arc"; a richly theological piece that explores the martyrdom of St. Joan and offers a provocative look at the nuptial implications of her fiery death.

The fact that no one on this list, as far as I can tell, is a devout Catholic, does not diminish the power of their testimony. In fact, it makes their witness all the more compelling. Certainly the musician in this instance can't be accused of pandering to their audience (and most certainly not their record company). So what else should we assume about this suprising display of Marian piety but that he or she has stumbled upon some undeniable truth; a truth that they cannot help but to announce?

Posted by Blergalicious at 11:25 AM