The Virgin of Guadalupe vs. Frida Kahlo and Modern Art


If one were to walk into any shop in Mexico today, one would invariably run into two images: the Virgin of Guadalupe and Frida Kahlo. In fact, quite often Frida is depicted with the same iconic imagery as that of the Blessed Virgin Mary. The ubiquity of these two figures in Mexico can hardly be an accident (even if it is an accident of that particular shop owner). On the one hand you have Guadalupe who represents everything familiar and familial about traditional life in Mexico, and on the other you have Frida, a figure that serves as a kind of post-modern riposte to that previous ideal.


When I first encountered the image of Frida, I was under the distinct impression that I was looking at a man dressed in drag. It was only later that I was informed that Frida was in fact a woman with masculine features. Considering what we know now of the artist, that initial impression was probably accurate– and if I might say it– intended. Frida was no enemy of ambiguity, nor was she averse to disturbing imagery. She felt right at home at the circus, wandering about those warping windows, ogling those carnival characters, and reveling in that nameless figure we’ve come to know as the Bearded Lady. In any event, Frida and Guadalupe represent far more than a conflict in Mexican culture; they are the icons of a conflicted anthropology. 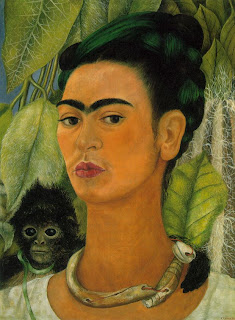 Even so, there is something far more interesting about these images of Frida than a good deal of modern art. Unlike most contemporary art, it does not require an explanation for one to find it intriguing, nor does it necessitate the snobbish presumption that if you "fail to appreciate this, well then, you are not worthy of it in the first place." Secondly, there is a sacramental quality to her work even if only in the negative sense. Her art is representative of her self image; it is an externalizing of her internal disposition. If you were to give it the most positive read, you might even say that it has a little of that Flannery O'Connor grotesquery about it. But just because something can be appreciated on that level does not necessarily mean that the artist intended it that way.

What Frida represents is a twisting of the feminine ideal. Judging from her often unflattering depictions of herself, there is clearly an element of self-hatred in her work. In some of her pieces she is depicted as a monkey or an animal, in others she graphically depicts the pain of her miscarriage in a most brutal fashion; in others still she clearly embellishes the amount of facial (and eyebrow) hair she has in order to appear as masculine as possible, or at least as masculine as one can be in a dress and earrings. Lest you be tempted to think that she is at peace with all of this gender (and animal) bending, suffice it to say that the perpetual sneer on her face should erase any doubts in this regard.

The contemporary artist is not so much the product of an artistic movement as the consequence of modern thought. In simpler terms, he is a deconstructionist. He takes one good look at the world and determines that the only way to salvage it is to demolish it. So he declares that God is dead, and then proceeds to envision a new world order, one that goes “beyond good and evil,” one that is even "more human than human.” He really does want to re-invent the wheel (though the one he envisions is far more “wheely” than the previous). Yet what he comes up with is not innovative at all, in fact, it is nothing more than a horrible hybrid, a collapse in the distinction of subject and object, “a picture of Dorian Grey.”

That is not to say that the modern artist lacks the capacity to turn heads– indeed that is practically his raison d’etre. The problem lies in his strategy. Unlike the traditional artist, his goal is not to create a masterpiece; but to shout “fire” in a crowded theater. He is not interested in wooing his audience; rather he is trying to insult them. He is like the doctor in the mental hospital that uses shock treatments in order to achieve a desired end. His “therapy” is successful insofar as it makes the patient more amenable to an unsavory environment, but what it lacks entirely is the ability to inspire a more meaningful existence.

Posted by Blergalicious at 10:29 AM